Syria’s tech-savvy and socially engaged citizens are resisting the state in creative ways. Conflict is never black and white, and in today’s ever-more-connected world, attempts to address conflict are often quite colorful. This was evident earlier this month when Chinese bloggers morphed a classic photo of citizen resistance from Tiananmen Square, changing a line of government tanks into a parade of big yellow ducks. The image was powerful and provocative; thus the role of the meme in Chinese social media.

Syrian citizens’ imaginations are also playing out colorfully on the Internet. Taking a closer look at the nuances of Syria’s resistance movement can help us complicate the oversimplified and often exoticized picture of people and events in the Middle East that is presented in popular media. In a recent article for Jadaliyya, Berkman fellow and researcher Donatella Della Ratta suggests, “As much as images of violence, civil war, and sectarian strife become prominent in the media narrative of the Syrian uprising, little gems of innovative cultural production, artistic resistance, and creative disobedience continue to sprout across the virtual alleys of the Internet.”

So what does a civil society movement on the Internet look like in a time of civil war?  In the case of the "I am with Syria" campaign, it looks much like a volley of artistic images with subtle political messages. The back and forth that started on the streets continues to play out on Facebook, Twitter, and blogs.

Eye-catching posters began to show up in Syria around the time the uprising began in March 2011. The first round of images was published by the al-Bashar regime and featured the phrase, “I am with the law.” Iterations included, “whether progressive or conservative, I am with the law,” “whether boy or girl, …” and “whether young or old, ....” Citizens were insulted by the campaign’s assumption that the law was the exclusive domain of the state and that anyone opposed to the regime was outside the law. They responded initially by vandalizing the posters, but soon developed a less aggressive form of resistance. They designed their own posters with their own slogans, riffing on both “I am with the law” and on an updated version of the government campaign that used “I am with Syria, my demands are your demands” as the primary text.  These user-generated designs—ranging from “I am with Syria, my demands are freedom,” to increasingly humorous and satirical statements—appealed to Syrians’ sense of humor, beauty, and creativity rather than instigating division and bloodshed. 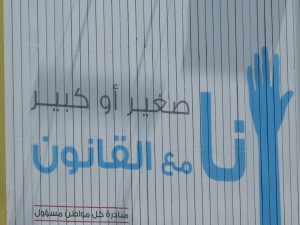 Citizen-generated versions of the posters showed up on the streets and were widely disseminated online, particularly on Facebook. In May 2011, the “I am with Syria” Facebook page was launched; it continues to post images and host comments. One of the resistance posters states, “I am with Syria, I lost my shoes,” which is a cultural reference suggesting that people have thrown their shoes at al-Bashar as an expression of their disrespect. When a man threw his shoes at George Bush in 2008, it made global headlines. Throwing your shoe at someone is a serious insult in the Arab world. “I lost my shoes” is just one of the culturally rich jokes, parodies, and satirical slogans that went viral as part of the “I am with Syria” Internet campaign.. 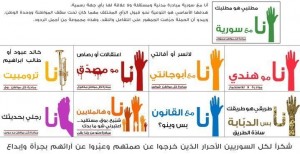 Collage of remixed versions of the original posters. one reads "My was is your way but the tank is in the way" and another "I am with the law, but where is it?" Image courtesy of Ammar Alani via Donatella Della Ratta.

“I am with Syria” is a playing out across the Internet like a conversation in the language of memes that gets a clear message of political resistance across, without inciting further violence in a country already ravaged by civil war. The central image of the campaign has always been an upward reaching human arm that represents an alif- the first of 28 characters in the Arabic alphabet. Atop the alif is a hamza, (an Arabic marker equivalent to a vowel sound in English). A human hand stands in for the hamza. The hand is open in both government and citizen- inspired posters. That the counter campaign kept the open hand speaks to its central spirit and purpose. The hand could have been a fist- a classic symbol of resistance- fight the power so to speak- but this hand is extended and open, waiting for another hand to grab on and link up.  One of the strategies of war is to divide and fracture communities; in the case of Syria, the Internet is helping people in battle-weary communities stay connected. 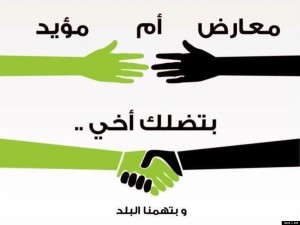 “Whether Anti or Pro-Regime, You Are Still My Brother.." Photo credit: http://www.tacticalmediafiles.net/