Ahead of last week’s anniversary of the 1989 Tiananmen Square protests, the Chinese government engaged in what has now become an expected annual crackdown on Internet freedom. This year, however, the government adopted more advanced and subtle means of censorship. Rather than blocking all search results for sensitive terms, websites such as Weibo are instead displaying carefully curated results that have little to do with the 1989 protests.

Although Chinese censorship is ever-more sophisticated, Internet users in China are finding creative ways to express themselves and commemorate the tragedy. Memes - spontaneous, humorous, grass-roots-style online satirical works - are a significant feature of the Chinese Internet, ranging from 2009’s Grass Mud Horse to memes involving sunflower seeds and self-portraits of people wearing sunglasses, both inspired by arrested Chinese dissidents. These memes take the form of photos, videos, animations, and texts that defy and ridicule Chinese authorities.

This year, Chinese Internet users created multiple variations of an iconic photograph from the 1989 protests, incorporating images ranging from yellow ducks to Legos. These images began to circulate through social media in China days before the June 4th anniversary as a way to bypass censorship, and gained momentum largely for their humor and brevity.

The famous photograph – known as “Tank Man” – of the 1989 protest has long been banned in Chinese cyberspace. The photo, featuring a man blocking a series of tanks during the Tiananmen Square protest on June 4, 1989, directly points to the dictatorship of Chinese government and has startled people worldwide.

Days before this year’s Tiananmen Square Anniversary, someone wittily replaced the four tanks in the original photograph with giant yellow ducks. The meme is based on a 54-foot-tall duck sculpture, created by a Dutch artist, that currently floats in Hong Kong’s Victoria Harbor. 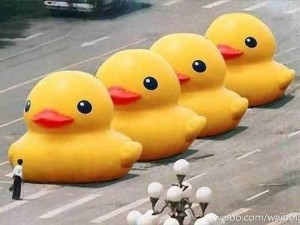 The “tank man” picture is also photoshopped into a Lego man facing down three green Lego tanks. By embedding these images in posts instead of using banned keywords, Internet users can often escape automatic deletion. 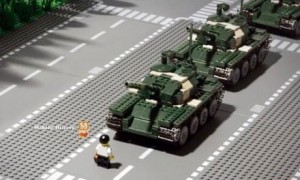 Another picture showing a cow in front of a line of bulldozers is also getting past Weibo’s censors. While Weibo has blocked the words “big yellow duck” in response to the memes, the word “cow” appears to be uncensored. 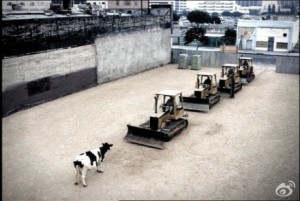 While censors continue to add new words to the blocklist, Internet users continue to create new images, making it impossible for the government to shut down conversation about the Tiananmen Square protests entirely.