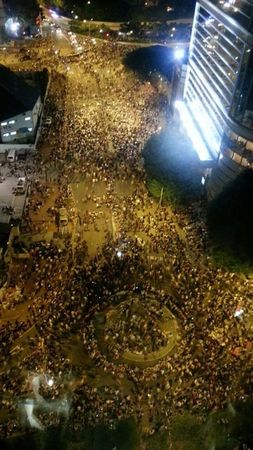 In late September 2014, the people of Hong Kong embarked on a civil disobedience movement demanding genuine democracy and universal suffrage for the 2017 Chief Executive election. Recently dubbed the “Umbrella Revolution” for its use of umbrellas to counteract pepper spray and tear gas from the police, the Occupy Central movement has captured worldwide attention. Since the Occupy Central movement started, much information has been circulating regarding the various aspects of the protest. This post is an attempt to provide and overview of the major trends relating to Internet and media freedom.

The Occupy Central movement is a culmination of tensions building up since mid-2014, surrounding reforms to the election process for the 2017 Chief Executive, Hong Kong’s political head. Although the Chief Executive is currently elected by a 1,200-member Election Committee, the Beijing Government had declared in a 2007 decision that there will be universal suffrage in 2017. However, Beijing’s position is that the “universal suffrage” will only include candidates who will be pre-approved by a Nomination Committee. Such potential “filtering” of candidates has given rise to significant opposition from the pro-democracy camps (for a legal backgrounder on the Occupy Central movement, see here).

Hong Kong, in addition to being a global financial center, is also one of the most wired places in the world. Accordingly, the Occupy Central movement has been unfolding just as much in the online space as in the streets of Admiralty and Mong Kok.


By WAI TUNG YEUNG, Do You Hear The People Sing In Hong Kong 香港人試問誰還未覺醒, via YouTube

Representative of the highly wired Hong Kong society, the use of social media has been at the crux of the Occupy Movement since the beginning. This is perhaps best illustrated by the brilliant adaptation of “Do You Hear the People Sing” from the Broadway musical Les Miserables by an anonymous volunteer. The song has since become an anthem for the movement. Hong Kongers have relied extensively on social media to not only present their cause and win public support, but also facilitate and organize protests. In addition to mainstream social media such as Facebook and YouTube, Hong Kongers have been exploring the use of online tools that facilitate mapping, live-streaming, and file-sharing in collaboration with partners from Taiwan, giving rise to a cross-border Chinese activist community.

Given how critical social media has been for organizing the Occupy Central movement, it is unsurprising that rumors of mobile phone and network service shutdown surfaced almost immediately, and were met with much trepidation. As the rumors spread, download rates of FireChat, an app that allows people to set up “mesh networks,” shot up in Hong Kong, garnering 100,000 new users in a span of 22 hours. FireChat enables a mobile device to function as a small router by using its Bluetooth, WiFi, and peer-to-peer connection. This allows devices to connect directly with one another and also cross-connect to form an independent web, as long as they are close enough to each other (thus the name “mesh network”). Despite well-founded security concerns (for example, any information that travels across the network must be relayed by every intervening device in between), mesh networks have been proven effective when no reliable Internet or mobile connection exists. Mesh networks are particularly resilient because it is impossible to shut down the network itself without gaining physical control over the individual devices involved, each of which serve as little “towers” sustaining and expanding the network. Although it has been questioned whether it is legally feasible for the Hong Kong government to disconnect the network, Occupy Central’s use of FireChat is certainly part of a growing trend towards mesh networking.

Not So Peaceful or Polite: Cyberattacks

Faithful to its spirit of non-violent civil disobedience, the Occupy Central movement had been characterized by peaceful sit-ins and the politeness of the protestors, as well as a relatively positive relationship between the protestors and the police. However, this no longer appears to be the norm. Recent reports include increasingly violent clashes leading to numerous arrests, use of tear gas and batons by the police, and highly suspicious attacks on the protestors.

This escalation is not confined to the offline protests—attacks have been cropping up on independent media and pro-democracy websites, as well as on student organizing platforms. Going beyond targeting servers, these attacks were also aimed directly at the database system, intercepting and blocking visits to articles with tags such as “social movement.” In addition, protesters involved with the Occupy Central movement have reported Trojan Horse attacks, initiated by anonymous messages sent via the popular messaging app, WhatsApp. The spyware, once downloaded, is capable of accessing personal information, calls, and messages, and of tracking the physical location of the device.

Although such attacks have been largely under-reported by mainstream media, they did not escape the attention of hacktivist group Anonymous. Anonymous issued an official video message, promising to wage cyber warfare against the Hong Kong government. Since then, Anonymous has made good on their word, attacking and bringing down several government and pro-Beijing websites. Whether these attacks are truly effective or beneficial for the Occupy movement has been questioned, but they have received far more attention from media outlets than attacks on pro-democracy websites.

The disparity in media coverage between cyber attacks on pro-democracy websites and attacks on government and pro-Beijing websites is not an isolated phenomenon. Since the beginning of the Occupy Central movement, highly censored and selective reporting of the Occupy movement within mainland China has been repeatedly criticized.

For example, terms such as “Umbrella Movement” or “Occupy Central” are censored on most Chinese social media platforms, including Sina Weibo and WeChat. This censorship reached an all-time high as the Occupy Central protests reached their peak during the last week of September 2014, signaling both a high level of interest from mainland Chinese netizens in the Occupy Central movement as well as the Beijing government’s defensive stance. Hashtags as general as “police” or “Hong Kong” started to be blocked on Weibo; Weibo also removed “Hong Kong” from its trending hashtags. More tellingly, posts that were critical of the Occupy movement or unrelated to the protests could be accessed, revealing the nature of the censorship.

Beyond such term-specific censorship, the Occupy movement and rallies often go unreported in mainland media outlets, and when they are, the number of participants is heavily downplayed. On the other hand, pro-Beijing voices are given the spotlight, and are presented as the “silent majority” expressing the true will of the Hong Kong people. An August 2014 pro-Beijing rally, which faced much skepticism in Hong Kong, including charges that participants were mainlanders brought in by the Beijing government, received coverage from most major (government-controlled) mainland outlets, including Xinhua News and People’s Daily. The estimated number of participants varied widely according to the reporting agencies, showing the heavily skewed nature of the reporting: Hong Kong University reported that 79,000 participated; while mainland media put the figure at 193,000. Mainland outlets also focused on celebrations of the 65th year of Communist Party rule, broadcasting images of crowds waving Chinese flags. The only Beijing-sponsored outlet that did not flatly ignore the Occupy Central protests was Global Times, which publicized a highly polemical piece on the protests, accusing them of ruining Hong Kong’s image and claiming they were “doomed.”