On June 9, Edward Snowden, an American former contractor for the NSA, revealed himself as the whistleblower in one of the biggest surveillance scandals in US intelligence history.

Snowden’s flight to Hong Kong in late May stirred a wide and active response on the Chinese Internet. Snowden’s name was one of the top-ranked topics on China’s Twitter-like microblogging website Sina Weibo in June. Vexed by the country’s long-standing and prevalent surveillance system, many Chinese Internet users have hailed Snowden as a hero.

“He is brave. He is a real fighter for human rights. Now he is in China, we should protect him,” wrote Xiaodong Wang, an Internet user based in Beijing. Another user wrote, “it doesn’t matter whether you can call Snowden a hero. What’s worth of praise about him is he chose to break the rules rather than to be one of ‘the Great Silent Majority.’ Few people have his courage.”

Several prominent Weibo users with millions of followers, known as “Big Vs” for the large letter V (signaling a verified user) next to their account names, also expressed their appreciation of Snowden’s actions. Lvqiu Luwei, a well-known journalist who has 2.7 million followers on Weibo, wrote:

To the public, Snowden is a hero. But if he leaked the information to other governments or did this simply for money, people would think of him as a spy. I asked a guest in the programs I recorded yesterday, ‘will there be a Snowden in China?’ And the guest responded with a quick answer, ‘there won’t be a Snowden-like person in China. If there were, the person will never get out of the country.

Another popular user with the nickname “Pretending to be in New York” (@假装在纽约) posted the following comment on June 25, which gained momentum when circulated on the social media. The humorous tweet makes fun of the Snowden’s story while criticizing the dire human rights conditions and heavy-handed Internet control in China:

If Snowden were a Chinese citizen, 1) Hong Kong would agree to hand him over to the Chinese government; 2) the US would hail him as hero and then try to rescue him immediately; 3) his name would become a ‘sensitive word’ on the social media in China and all discussions related would be banned; 4) Over a thrilling struggle, he would finally board the airplane to New York; 5) people would acclaim the escape on the social media in China; 6) New York University would invite him to be a visiting scholar (referencing to the Chen Guangcheng incident); 7) the state-run Global Times would post articles criticizing Snowden, and it would become the target of Chinese netizen’s besiege. 8) American talk shows making fun of the story would be translated into Chinese.

Still, many Chinese were disappointed at the seeming hypocrisy of the US government, which appears to be engaging in activities more typically associated with the Chinese government. Though Hong Kong—which has a long tradition of free speech—operates separately from Mainland China, it is under the political influence of a nation known for its restrictions on free political expression.

To some in China, the news badly undermined the US government’s criticism of China over cyberespionage. “It looks like Obama has been assimilated by a certain political party (Communist Party of China),” Sina Weibo user Leigh Chiang wrote in a sentiment shared widely across the site.

Somewhere between 300 and 900 Hong Kong residents marched in support of Snowden, despite the ambiguous attitudes from the SAR (Special Administrative Region) government. 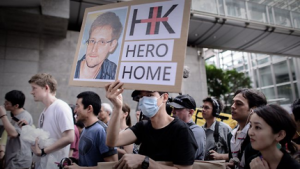 Snowden’s announcement came as China began an official three-day holiday for the Dragon Boat Festival. Still, it managed to catch the eyes of the country’s social media users.

The leak broke just ahead of the much anticipated “laid-back” Sunnylands Summit between Obama and China’s Premier Xi Jinping – where, among other issues, cyber-security was prominent on the agenda. There’s no lack of irony in the leak. The US government has been criticizing the Chinese government for Internet filtering, and a more recent accusation made by the Obama administration is that China has been hacking into American computers. Now it turns out one of the biggest threats to the pursuit of individual freedom and privacy in the US may be the unbridled power of the government, according to a Chinese expert on American affairs. The country that seems to benefit most from Snowden’s revelations is China.

Bloomberg News reported that Lee Kai-Fu, the founding president of Google China, stated that Snowden’s revelation “seriously discredits” US claims about human rights and privacy. Lee, who has 49.3 million followers, is a Big V, also known as verified user on Sina Weibo. He wrote in a microblog post on June 11 that he admires Snowden’s “principles and values.” 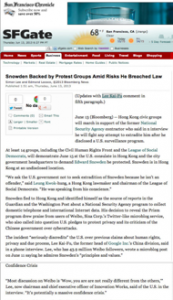 Lee Kai-Fu’s criticism of the US government has invoked some criticism on social media, among which some netizens ridiculed him as turning his political stand to align with “Fifty Cent Party,” the people hired by the Chinese government to post comments favorable to the party to sway public opinions.

While Hong Kong-based media outlets are featuring Snowden in top headlines, the mainland Chinese media are not treating this like a big deal. Beijing has remained quite low-key towards the issue, with major news portals’ headlines saturated by the Obama-Xi meetings.

The Global Times, the tabloid-like subsidiary of The People’s Daily, which is the major state-run media outlet in China, ran an article about “the latest online spy game,” accompanied by a caricature cartoon of the NSA emblem, turning the bald eagle into a spy. The article said Snowden could offer intelligence that would help China update its understanding of cyberspace and improve its position in negotiations with Washington. 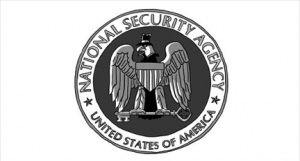 China’s largest state-run news agency, Xinhua, didn’t mention Snowden in the top 10 stories on its website’s front page. Xinhua has not published any specific reports on Snowden, though there is one video report on the NSA as a “spy agency.” It’s hard to tell whether the lack of reporting is a conscious decision to avoid stirring up a conversation that might come back to China again. 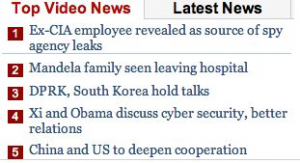 When the country’s media outlets constrained the urge to make the Snowden story headlines, news broke on June 22 that NSA targeted China’s top universities in extensive hacking attacks. Suddenly, reports began to emerge from repressed writers and editors; comments and discussions on the news overwhelmed social media in China.

“The U.S. Has Attacked Chinese Networks for 15 Years,” said a headline in The Yangtze Daily. “Snowden Leaks Information About Prism to Reveal the Hypocrisy of the U.S. Government,” added The Wuhan Evening News.

Tsinghua University was among the targets of NSA’s cyber-snooping activities, with at least 63 computers and servers attacked during a single day in January, according to information leaked by Snowden. The university is home to one of the mainland’s six major backbone networks - the China Education and Research Network (CERNET) – a hub from which Internet data from millions of Chinese citizens could be mined.

A spokesperson for China’s Foreign Ministry didn’t have an immediate comment on Mr. Snowden’s comments. Professor Xu Ke, deputy director of the Institute of Computer Networks at Tsinghua University, has previously said that most data passing through network backbones was not encrypted and that most attacks on such networks were carried out by governments, as individual hackers would face ‘colossal’ amounts of information that would be extremely difficult to handle.

While the mainstream media in China remained silent towards the PRISM scandal, observers have noticed the subtle changes of its contents. In April 2013, China tightened its media’s quotations of information from foreign press, aiming to exert stronger control over domestic media outlets. Ironically, Chinese media began to include more quotes from foreign press as the Snowden story was revealed.