In late July, plans for an undersea fiber optic cable stretching from Russia to the newly-annexed Crimea were realized. Since Crimea’s secession from Ukraine, news of Internet disruptions in the region has surfaced several times. In early March, Ukraine’s previously state-owned, newly-privatized ISP, Ukrtelecom, reported suspicious interruptions in Crimea. The company’s offices were seized by unknown forces, and Crimea was cut off from the rest of the country’s connections. These lapses in connectivity lasted a short few hours before being restored. Later that month, Russian Prime Minister Dmitry Medvedev issued impassioned calls for telecommunications provider Rostelecom to extend its services to the newly-annexed Crimea. He claimed such a move would fall in line with Russia's attempt to integrate Crimea into the rest of the country. His calls were part of a symbolic campaign to “Russify” Crimea’s citizens, who would also, for example, be issued Russian passports during this period of change. Earlier that month, the electorate of what was formerly known as the Autonomous Republic of Crimea voted to join Russia and secede from Ukraine, swiftly ushering in a period of transition from Ukrainian influence to Russian jurisdiction.

Crimea had previously been wholly dependent upon Ukraine as the supplier of its power – electricity, water, and telecommunications. Up until this point, Ukraine’s Internet has been growing rapidly. The country has over 200 domestic autonomous systems that connect to international transit (and more than 1600 domestic autonomous systems), linking Ukraine to Western European Internet markets. This flourishing heterogeneity has helped the country’s Internet emerge unscathed from both the global financial crisis of 2007 and the more recent Euromaidan protests. Renesys notes that Ukraine’s varied domestic network landscape is in stark contrast to those of other politically volatile nations, who may have more centralized domestic networks that collapse under the weight of political unrest. Syria, for example, has merely two domestic autonomous systems that are connected to international networks, making its Internet more vulnerable to a centrally-orchestrated shutdown. 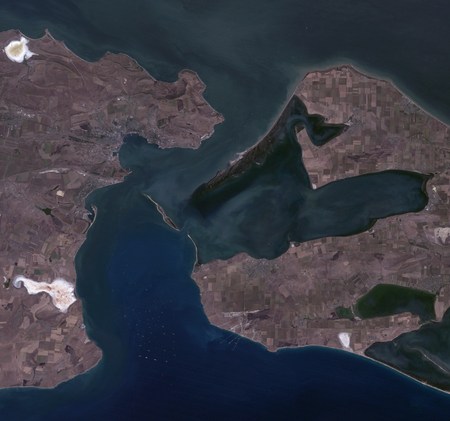 The Kerch Strait, via Wikimedia Commons.

Rostelecom responded fairly quickly to Medvedev’s charge. The physical construction of the nearly 28-mile-long cable, located in the Kerch Strait, took a little over a month; the project itself, which cost somewhere between 11 to 25 million USD, was completed by April. In May, Rostelecom branded its new Crimean services as “Miranda Media.” Renesys soon began tracking changes in Crimea’s Internet traffic in mid-July, with ISPs in the region gradually adopting Miranda Media.

Renesys welcomed these changes as a healthy nod to diversity of Internet Service Providers, something that it claims the region has sorely lacked for years now. The move is potentially giving netizens more ease of access to Russian online media. Miranda Media provides a more straightforward path to this than did Ukraine’s circuitous networks, which route connections toward Western Europe.

Crimean netizens who use Miranda Media – a switch that’s likely, given Crimean netizens’ reliance on Russian media in the months following annexation – will likely experience Russian Internet controls firsthand. This means that Crimean bloggers with over 3,000 readers who utilize Miranda Media’s services will, as per a newly-ratified Russian law, be required to register with federal communications body Roskomnadzor, barring these bloggers from anonymity and putting them on the same playing field as working journalists. As such, these bloggers may have to resort to the inventive, playful circumvention tactics so many Russian bloggers have imagined in the wake of the bill’s passage. Users will be subject to the stymies of Russia’s Internet blacklist, and they may have to show proper identification to use wi-fi in public. Crimean sites may have to comply with the newly-passed data retention law, which relegates all web services in Russia to store data on Russian soil. Crimean netizens may not even be able to access BBC, pending a firm decision from the Kremlin on whether or not the site should be banned within Russia.

As of now, it’s unclear whether this geographical and political secession will lead to a sort of “Internet secession” for Crimea from Ukraine. A divorce from the Ukrainian Internet, Renesys notes, can potentially hold the newly-annexed region back from capitalizing upon its full potential for international connectivity. Now, Crimea may fall in the dead center of Russia and Ukraine's so-called "information war" – one in which Ukraine, previously known for exercising few controls over the Internet, has adopted a blacklist of its own to quell “extremist” sentiment within its borders.