In a recent op-ed titled “Kurdistan deserves an amicable divorce from Baghdad,” Masrour Barzani, son of the former president of the Kurdistan Regional Government (KRG), made the case for the independence of Iraqi Kurdistan. This is not the first time members of the KRG and Iraqi Kurds have made the case for independence, but as the war against ISIS drags on, the West has become more receptive to the case for Kurdish independence. Since the turn of the millennium, the historically oppressed minority group has become a major player in Iraqi politics; however, relations between Erbil (the capital of Iraqi Kurdistan) and Baghdad remain contentious. One of the reasons for these relations is that the Iraqi government and the Kurdish government have different policy goals, something that is particularly apparent with regards to the internet. 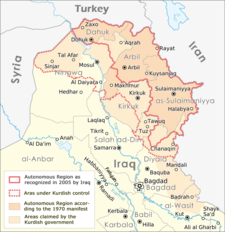 The current internet policy in Iraq is somewhat complicated. Internet service providers (ISPs) provide citizens with internet service, but there are laws preventing private ownership of “fixed networks transmitting domestic data,” which essentially restricts private companies from owning networks within Iraq. Effectively, the ISPs either have to rent the traditionally weak networks of the Iraqi Telecommunications and Post Company, which use fixed networks such as the submarine cable at Al-Faw, buy transit from networks outside of Iraq, or maintain networks outside of Iraq. Additionally, the government “levies taxes on transmitting data” on non-government-owned networks, which means that the ISPs have to pay an additional fee if they choose to buy transit from another private company. These policies have driven prices as high as $399 monthly for one megabyte per second speeds.

Therefore, ISPs in Kurdistan are in a perfect position. Geographically, Kurdistan is close to Iran, Azerbaijan and Turkey, which gives providers in the region plenty of options for establishing international networks. ISPs in Kurdistan are able to provide internet throughout Kurdistan; these companies can then sell transit to ISPs in Iraq. As of 2014, companies based in Iraqi Kurdistan, namely Newroz Telecom and IQ Networks, supplied around 75% of networks to private ISPs in the rest of the country, while other companies obtain access to Jordanian networks, satellite networks, or connections to Turkey.

The Kurdish companies enjoy more success because the “Baghdad bureaucracy” hinders the Iraqi government’s ability to provide reliable internet. Private ISPs usually connect to Kurdistan through Mosul and Kirkuk; although this became more difficult when ISIS took control of Mosul. When it comes to supplying internet outside of Iraq, the government has a positive relationship with these companies; for example, IQ Networks obtained a $100 million dollar contract from the Iraqi government in 2015 to “carry international traffic through Iraq to link to Asia and Europe,” with the caveat that the government would own the network. On the other hand, the Iraqi government tends to fight the spread of IQ Networks and Newroz Telecom within Iraq. Doug Madory, a researcher at Dyn, insisted that “If Kurdistan and Iraq become adversarial, [the internet] could definitely become an issue.” Although the KRG and Iraq maintain stable relations now, it has been a rocky past.

A dispute between the KRG and the Iraqi government in 2013 foreshadowed the problems that could potentially arise over internet control. When the Iraqi government resorted to shutting down the internet by “impos[ing] sanctions on ISPs” in an attempt to push down prices, Kurdistan refused to shut down Kurdish, Turkish, Bulgarian, Azeri, and Iranian providers that enter Iraq through Kurdish territory, like the ones operated by IQ Networks and Newroz. Iraq’s Ministry of Communication (MOC) attempted to “order” Kurdistan to comply with Baghdad’s decision; however, the KRG stated that “Kurdistan’s own ministry of communication is responsible for dealing with foreign companies and we have nothing to do with Baghdad.” Similarly, in 2014 after the fall of Mosul and the execution of Iraqi air force pilots, the government tried to shut down the internet once again, but it remained active in the Kurdistan region. Therefore, the KRG “made it impossible for the central government to execute a nationwide shutdown order” and can continue to do so.

The KRG has maintained independent control of its Internet in its territory. Earlier this year, the Iraqi government shut down the internet for three hour intervals during national student exams for the second year in a row, but these blackouts did not affect Kurdistan. This is not because of a lack of effort from the Iraqi government; it targets both “fixed line and mobile broadband” to prevent cheating, but the KRG is regularly able to circumvent these blackouts. The importance of social media in Kurdistan, has been documented by the media, but in Iraq, the KRG’s access to and control of reliable internet may prove a more useful tool in negotiations with Baghdad.