Hundreds of protesters gathered in cities across the United States and Europe last week as part of the "Restore the Fourth" rallies aimed to call attention to government surveillance. The non-partisan organization Restore the Fourth coordinated protests online and in person against what they deem to be unconstitutional digital surveillance in the United States, including the NSA's PRISM program. 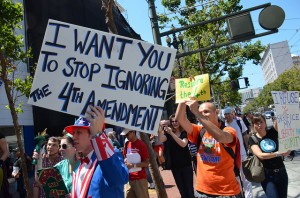 The grassroots movement, which initially galvanized support on Reddit, aims to end all forms of unconstitutional surveillance of digital communications in the United States. To do so, the group endorses the Electronic Frontier Foundation and StopWatching.us stance, calling for reforms to the USA Patriot Act, the creation of a special committee to report and publicly reveal the extent of domestic spying, and to hold any public officials responsible for unconstitutional surveillance accountable for their actions.

Rallies of varying sizes gathered in 100 cities across the United Sates, as well as in Munich and London. More than four hundred gathered in Washington DC and in New York. Reddit co-founder Alexis Ohanian posted a Vine video of the New York protest, which gathered in Union Square. A few hundred protestors gathered in San Francisco, reported The Guardian, peacefully making their way down Market Street.

Participants primarily heard about the event online, media spokesperson Douglas MacArthur told The Guardian. As live protests gathered in streets across the country and in Europe, thousands of websites held concurrent protests online. Internet Defense League members including Reddit, WordPress, and Boingboing displayed anti-NSA banner ads on their sites. On Twitter, the #Restorethe4th hashtag gained visibility for news related to the protests and to NSA surveillance more generally.

Now that the fourth of July is over, what comes next for the movement? MacArthur emphasized in an AMA (online interview) on Reddit that the movement was never about a single protest, but about galvanizing support and awareness of the organization's goals to curb surveillance. When asked when the next protest would be held on Reddit, a New York City rally co-organizer announced August 4th (8/4) as New York's next rally date and suggested a worldwide "1984" day, after George Orwell's dystopian classic.