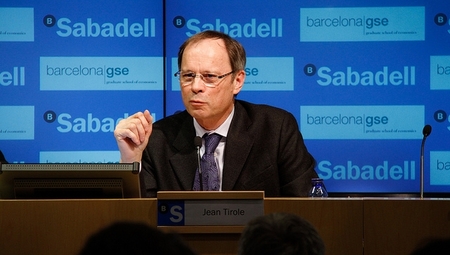 On October 13, the 2014 Nobel prize in Economics was awarded to French economist Jean Tirole “for his analysis of market power and regulation.” Tirole is well known for, among other things, his research on regulation of imperfect markets, and widely respected for work that has both academic and practical impact. Using mathematical models, Tirole focused on monopolistic and oligopolistic markets where existing information asymmetries between industry actors and regulators were further complicated by the possibility of collusion between dominant enterprises.

In the process of devising welfare-enhancing modes of regulation, Tirole developed two important concepts at the heart of today’s Internet industry: two-sided markets and network effects. Two-sided markets (or two-sided networks) are markets where two groups interact through a platform, and where the actions of the groups affect each other. One classic example is a newspaper: the readers (group 1) and advertisers (group 2) interact with each other through the newspaper (the platform). If there were no readers, the advertisers would not be interested in the newspapers. If there were no advertisers, the readers would have to pay a much higher price for the newspaper. The newspaper, as the intermediary (or the multi sided platform) needs to please both groups, which may at times have competing interests. Another good example of a two-sided market is Facebook, which again is a platform where advertisers and users meet. A related concept that Tirole also helped develop is network effects. The term network effect is used for a situation where the number of users influences the value of the good itself to others. Again, Facebook is a great example. Every time a friend of yours joins Facebook, Facebook becomes a more valuable product for you.

Tirole predicted that most Internet-era companies will operate as platforms for two-sided markets, acting as intermediaries between users and advertisers or software developers. However, according to Tirole, two-sided markets are more likely to become monopolistic, in part because of the network effects that favor the incumbents. In our world, where Internet giants happen to be multi-sided platforms such as Google and Facebook, it isn’t hard to see the relevance and prescience of Tirole’s work.

Communications networks, operating in typically inefficient markets, did not escape the attention of Tirole. In fact, one of his major works, Competition in Telecommunications , specifically dealt with the regulation of, you guessed it, the telecommunication industry. His work forms the basis of telecom regulation most of the developed world, except for the US. As a result, since his nomination on last Monday, a discussion surrounding the implications of Tirole’s work on net neutrality has been rekindled. Interestingly, both sides have claimed him for their purpose. For example, Harvard professor and Berkman Center Faculty Director Susan Crawford invokes Tirole’s work to argue for regulatory change that will bring US telecommunication regulations closer to Europe’s model. On the other hand, American Enterprise Institute fellow Roslyn Layton posits that Tirole’s work should be taken as a warning for regulatory capture, and suggests that adopting faster lanes on the Internet will encourage competition and innovation by turning the networks into multi-sided platforms.

More than anything, Tirole’s research is considered to add important nuances to government regulations. Tirole, by showing that regulations that may work well in certain market may not at all in others, has highlighted that regulation should be sector-specific—in other words, that regulation is “complicated.” Unsurprisingly, according to a New York Times interview with Tirole, that seems to be his answer to the net neutrality question as well.