As their government adjusts its Internet filters, raising some barriers and lowering others in a bid to contain a violent Sunni insurgency, Iraqis are leaning on alternative technologies to maintain access to online services.

On June 13, the Iraqi Ministry of Communication (MoC) ordered access cut to Twitter, Facebook, and a handful of other social media and news sites. Two days later, the MoC ordered a complete Internet shutdown in five of the nation's 19 provinces. The filtering list bore some incongruities: a June 20 report from the University of Toronto's Citizen Lab found that websites affiliated with the Islamic State in Iraq and Syria (ISIS), which has been behind much of the violence, remained accessible.

The government now seems to have flipped the filtering around. Twitter and Facebook are once again available, but sites with ties to ISIS and some news outlets (including Al Jazeera and Al Arabiya) are blocked, according to a list published by The Register .

VPN use remains popular, and after a brief drop, Tor use in Iraq is rising again. The Citizen Lab found that use of the encryption service in Iraq had been increasing since the second week of June, when the Iraqi government first introduced filters. Fellow Berkman Center project Herdict observed that Tor use dropped shortly afterward. The number of users began a sharp decline the week of June 29 – only to shoot back up on July 5. 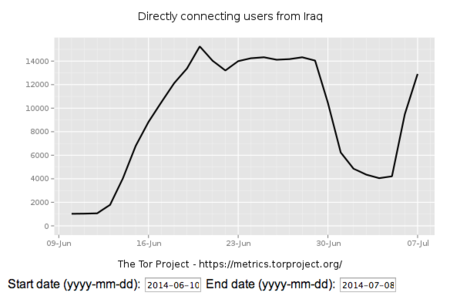 What does this mean? It's possible that it has something to do with the government's evolving filters: as sites like Twitter come back online, users may decide they no longer need to circumvent the filters. Alternatively, the MoC might be playing a game of cat and mouse with Internet users. The government blocked access to the Tor Project website last month, making it difficult for new users to access Tor. Activists responded by setting up mirrors in English and Arabic to help users get online.

Other VPN services have been more aggressive toward the filters: Hide My Ass (HMA) started offering rewards – in the form of HMA credit – to people in Iraq who report "new information about internet censorship in the country," namely new blocked sites.

FireChat, an app that lets smartphone users chat with one another without relying on mobile or wifi networks, has also seen a massive surge in popularity in Iraq over the last three weeks. The app works by connecting nearby phones via a mesh network, piggybacking off one another's connections as long as the phones are within 200 feet of one another.

The Iraqi government has justified the filtering as necessary to slow the communications and operations of ISIS. The militant group has been unusually effective at harnessing social media platforms to broadcast its message. The government has been getting some help from the social media companies themselves: Facebook began deleting links to websites selling ISIS gear last month. Since June 13, Twitter has been suspending some accounts affiliated with ISIS, some of which had tens of thousands of followers prior to suspension – and many of which have since been replaced by new accounts. After ISIS-operated @raqqa98 – which had more than 32,000 followers – was suspended, the account's name was changed to @w_raqqa, also now suspended.